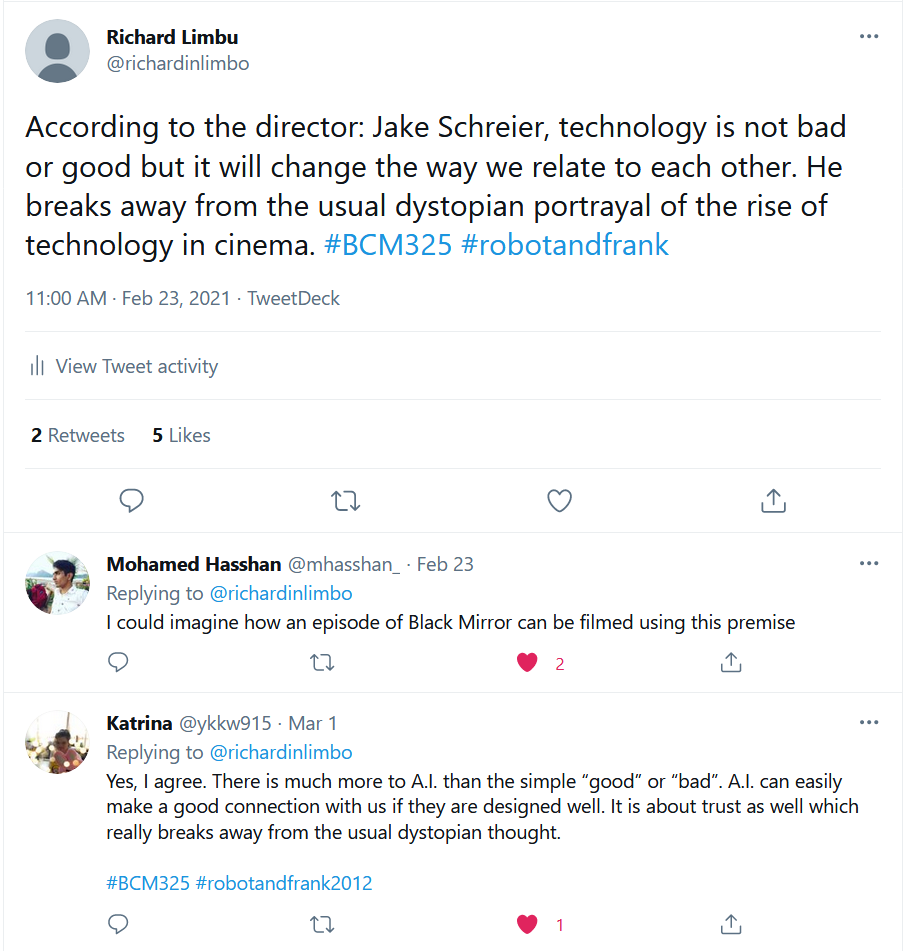 Here I bring up a belief which I shared with the director of Robot & Frank. How new technology isn’t inherently good or bad, it is up to the users to define how they will use them. I received some comments on how this could be an interesting take for stories of technology and I also had another student agreeing with this thinking.

Here I talked about how adorable I thought the robot was in Robot & Frank and a classmate of mine thought the same. Maybe some people might have robots as pets in the future as they can technically “live forever”.

Here, I talk about my interest in the concept of diving into a VR world and how this has influenced media in recent years. A classmate of mine commented about the similarities between two media franchises and how this idea could become a reality in the future.

I brought up the floating city from the movie: Alita. And one my classmates showed a similar example from a well known anime. It was interesting to see how ideas can be shared by different creators. My classmates were also curious as to whether this could be possible in real life. I still am not sure if it is. But according to the book, the city is close to the equator and it is chained to a space elevator which makes it possible to stay afloat.

I talked about how Alita’s motorball scene reminded me of Harry Potter’s quidditch and it seems like some of my classmates agreed with me. Another classmate of mine thought this scene was empowering to women.

Because the space elevator needs to be close to the equator, the film was set in Panama. That is why we are able to see South American architecture and signs in Iron City. A classmate of mine pointed out something interesting, how A.I. would not only be available in English but also use other languages.

Here a classmate tweeted how everything was going digital. To us having robot assistants in the future. I try to bring up how this may affect the domestic work industry. This also applies to housekeeping and janitorial industries as we will see a lot of people lose jobs after being replaced by Artificial Intelligence.

Loneliness and social isolation is a common problem people feel as they are getting older. Especially with the elderly as they see their loved ones pass. I bring up the idea of how robot assistants may become companions to humans in their old age.

I see people as a library of information and experience. Different people have different points of views in different times in history. This is also how people used to record history before the days of writing. I don’t believe we should neglect the old ways of doing things completely when adopting new methods. And so I still put value in the things humans have learned through all their years of living on Earth.

I don’t think this abnormality will happen in the real world. Tech companies will regulate patterns and make sure the AI has gone through rigorous testing procedures before the product will be available to the public. So unless someone creates an AI for themselves, a robot aiding robberies seems highly improbable.

I believe using robots does not necessarily mean we will become completely lazy. Like good and bad, it all depends on how we use this AI to affect our lives. So it comes down to the users again.

There are linguistic gadgets available on the market that can understand and translate all languages. So this technology is already available and we don’t have to wait 50 years for it. That is an incredibly long time. As for the transparent touch screen system. There is a projector that can sense our hands, so we can control our phones or the screen in the air already, it just that it is not that advanced yet. But these technologies will be here before you even know.

I talked about a common technique used in films like Metropolis or Parasite where they make the rich and wealthy live on a higher level compared to the poor common folk. This was a very interesting observation when I heard about it for the first time, and so I am glad to have helped my classmate into learning more and finding out a new movie to watch.

As the definition of cyborg changes, their relationships will also change. In the future, every human being may become cyborgs with the implementation of augmentations. I think relationships with non-sentient beings are weird. But in this case, the cyborgs are humans and it may just be the next step of humanity.