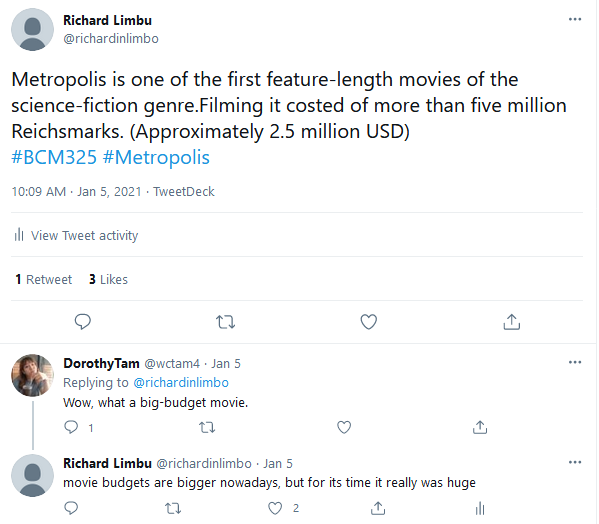 Here, I found an interesting fact. I didn’t know the currency in East Germany was called Reichsmarks. 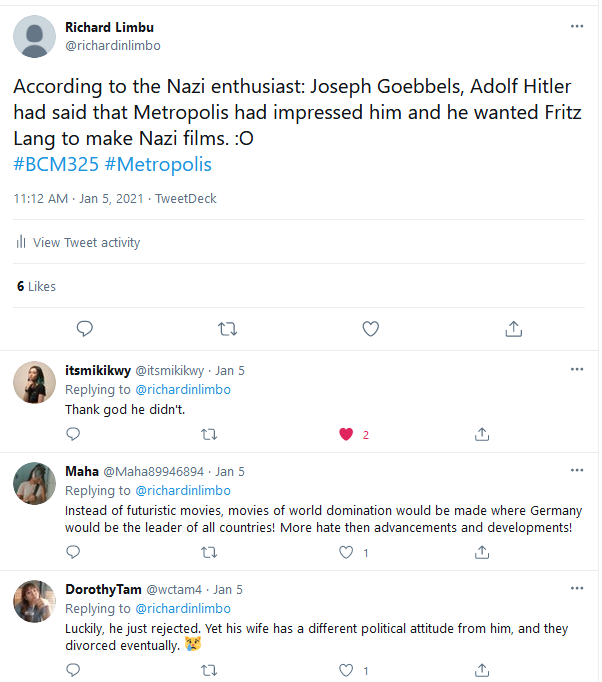 The work of Fritz Lang was so good, Hitler himself wanted Lang to make Nazi films for him. People were glad that Lang didn’t share Hitler’s ideologies and wonder what kind of movies would be made to represent Nazi Germany. 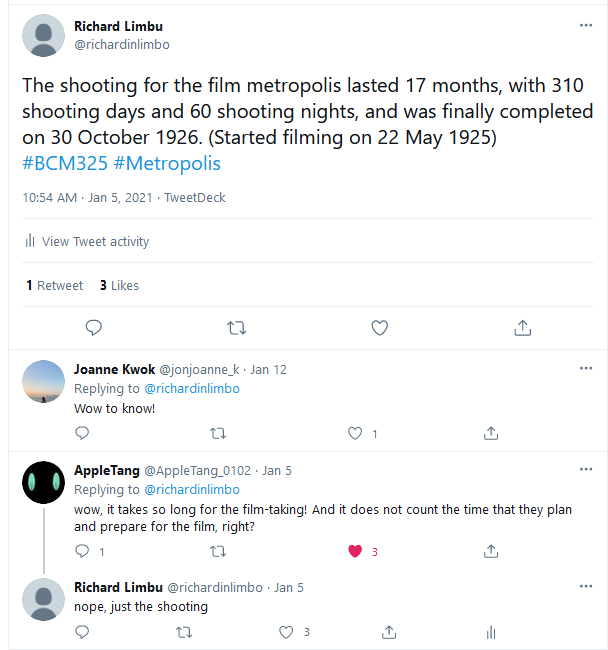 A crazy fact about Metropolis was that it took one year and 5 months to film JUST THE SHOOTING. That is crazy! 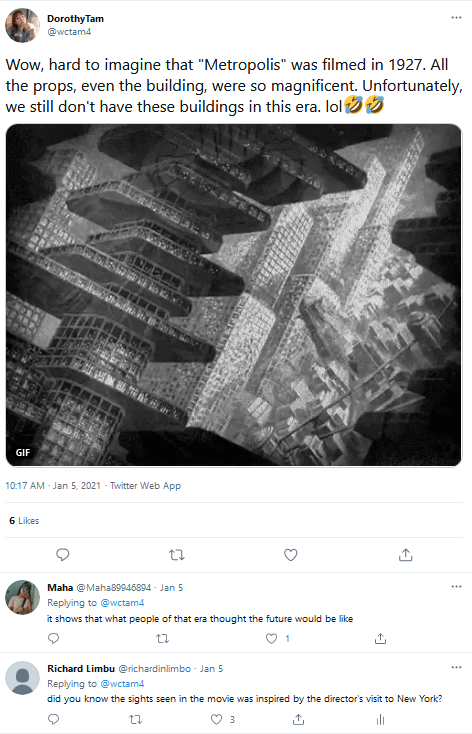 The world of Metropolis really resembles New York. The reason for that being, the director being inspired in his visit to the concrete jungle. 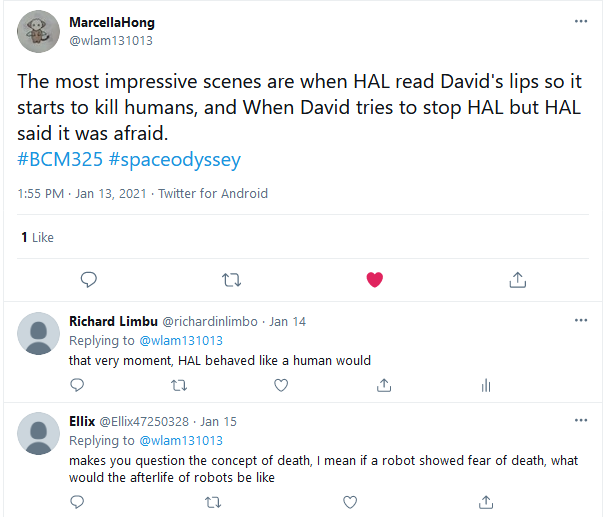 HAL showed human-like behaviour, trying to preserve its life. Even being able to read lips like a skilled detective. 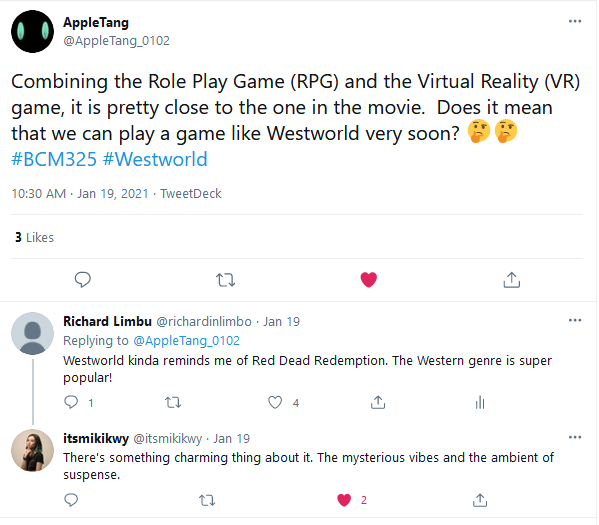 Westworld really reminded me of the RDR franchise, and I was happy to find some fans of the franchise who agreed with me. There really is some romanticism with the Western genre. 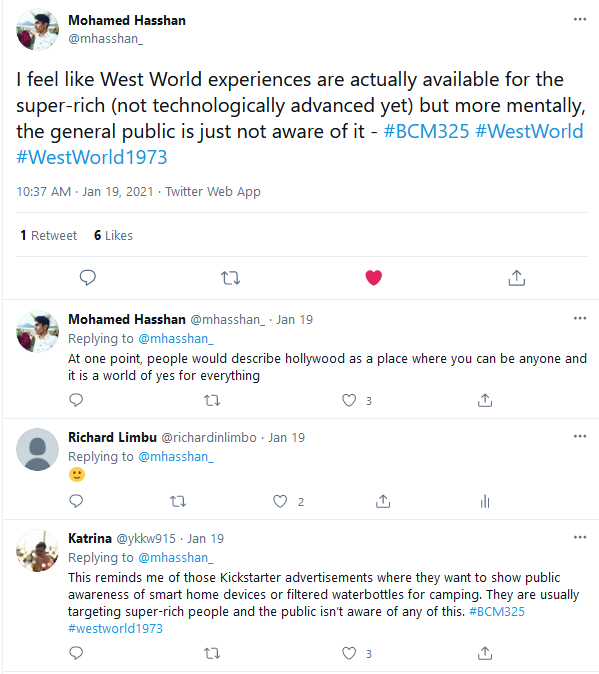 I found Hassan’s opinion, who knows what the elite are up to. The recent case of Jeffery Epstein is really suspicious. I just posted an ominous smile to spook this thread. 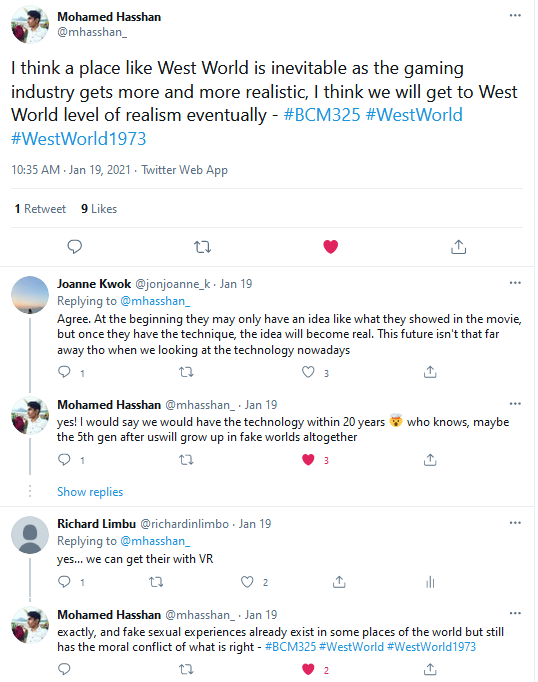 Being able to experience something like Westworld would be amazing, especially in our generation. Virtual reality popped up in my mind the first thing when I saw this thread.

Like most of us, we’ve all heard of Westworld. But we got introduced to its world from its recent TV series. 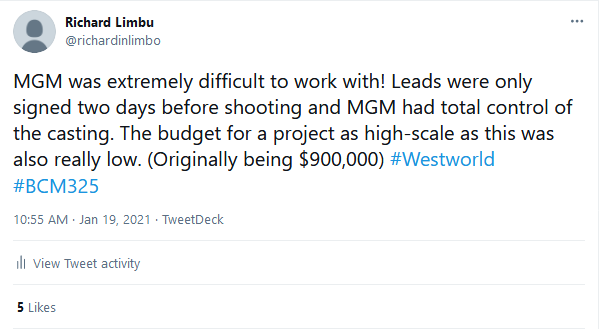 MGM did not have the best reputation back then with directors. But Crichton had no other choice because no one would give him the green light for his project. I just stated what Crichton had to deal with. 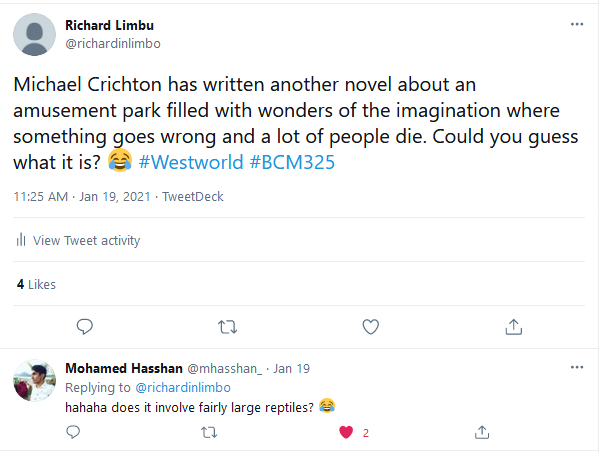 When I found Crichton had written Jurassic Park. I found it hilarious as they had a lot of similarities and decided to joke around on Twitter. Glad to find some people who liked my humour. 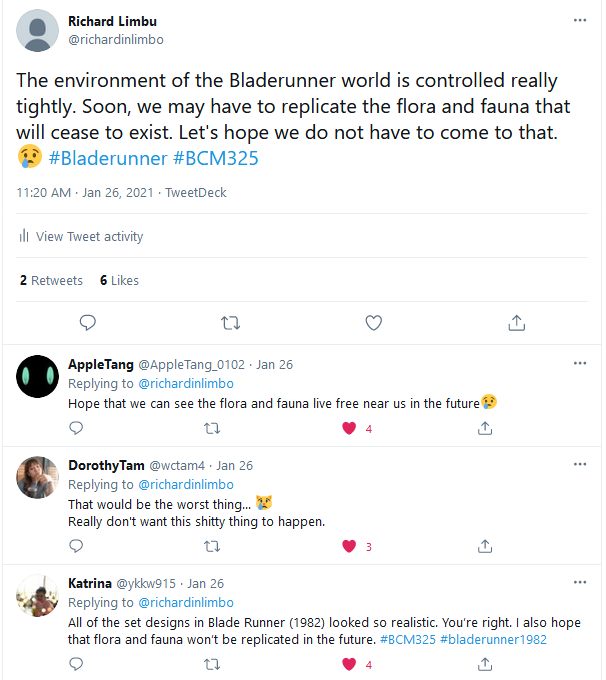 I became sad when I saw the fake animals in Bladerunner. With all the poaching and destruction of the environment this reality seemed incredibly likely. I hope we don’t have to come to this and become able to preserve what we have right now/recreate life with science 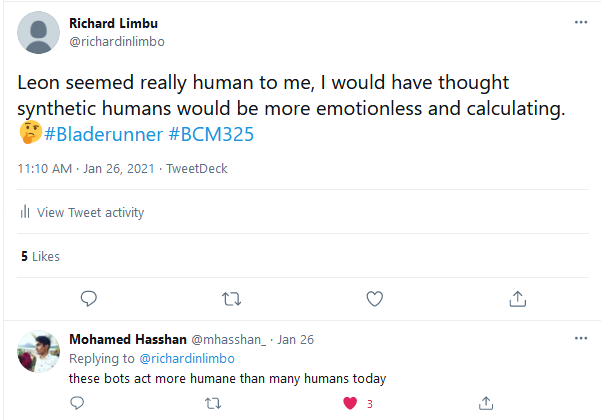 It surprised me how the synthetic humans were incredibly human-like while the humans were only focused on themselves and were cold to others. This stark difference between the two was something I found interesting. Maybe the writer was trying to tell us something? 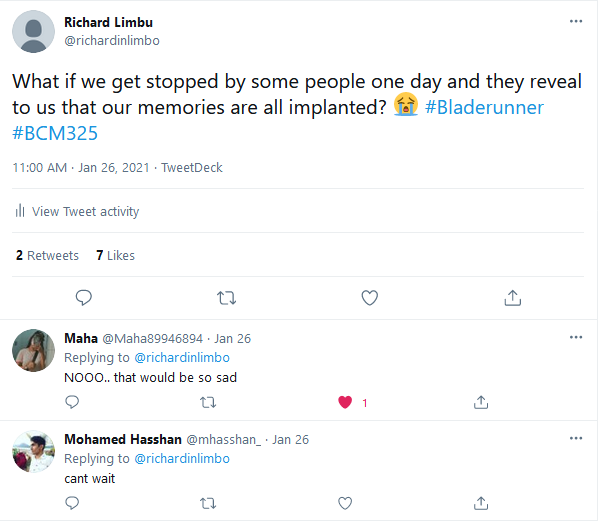 Another joke I played on Twitter to lighten the mood. All jokes aside, I hope this doesn’t happen to me or people I know… haha… 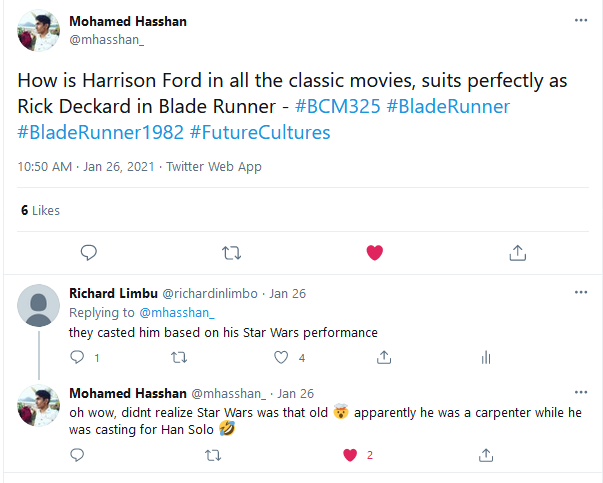 Harrison Ford is an iconic actor mainly for his role in the Star Wars series as Han Solo. I found this fact and decided to share it with my classmate. 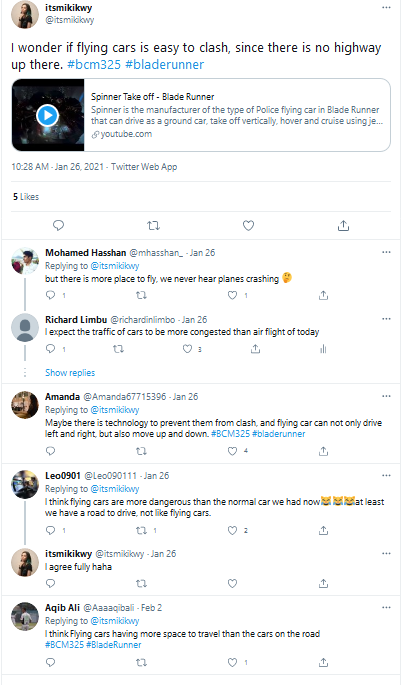 This thread had a lot of comments and I also decided to share my opinion. Flying cars will never work because although the idea founds cool. It is inconvenient and there are such more efficient ways to travel.

Ghost in the Shell:

I thought about being connected to the Internet with our brain and it did not seem pleasant. What if I wanted break from the Internet? I don’t think we would be able to disconnect so easily. 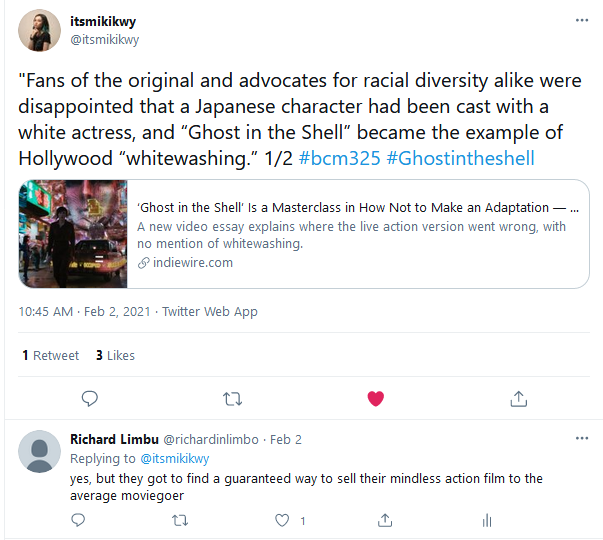 I found a classmate who shared my distaste for the newer Ghost in the Shell. We have all seen the negative reviews and videos about it. And while watching it, I could totally understand where they were coming from. We could clearly see the motives of whoever created the film. It wasn’t meant to be good, just get attention from people by playing with their nostalgia/hype for the series and cast a famous actress, ignoring the accuracy of the original works and wait for the cash to roll in. A terrible movie, wish we had watched the 1995 animation film instead as it tackles the identity issues and possibilities of technological advancement in depth. The changes they made with this film was incredibly lacklustre and dissapointing to the fans of the original works.

It was fun sharing my opinions and interacting with my classmates, as well as getting to watch the four movies. Really made me think hard about technology.