Students rank having fun/hobbies as their number one priority, their career and social life ties at number two. Social life comes up again as most respondents third priority. Marriage is the least of their concern. This may have to do with society and the economy now. It is harder to raise a family because we have to be able to sustain them so we spend more of our years studying for a degree or trying to find a stable job before finding someone and settling down. It may also be harder to find someone to settle down now, with social media distorting our standards and expectations of how our partners have to be. Hook-up culture is also more prominent than ever before. Although not all people take part in it, mob mentality makes it so we all share the same values. Social media, movies, songs, online videos, memes…etc. It spreads and affects the way people view the world. Emotional connection becomes less meaningful. The increased option of partners in social media and online dating actually makes it more difficult to choose someone and be satisfied because of the perception of not picking the right one or there being better candidates available (D’Angelo and Toma, 2016). This makes young adults lay off the relationship aspect of their lives and makes them focus on other things like their career or education.

When asked about what my respondents thought best helped equip them to face the real world. Family was the factor most people answered was the most important. Friends came second place, with school and the Internet following behind. 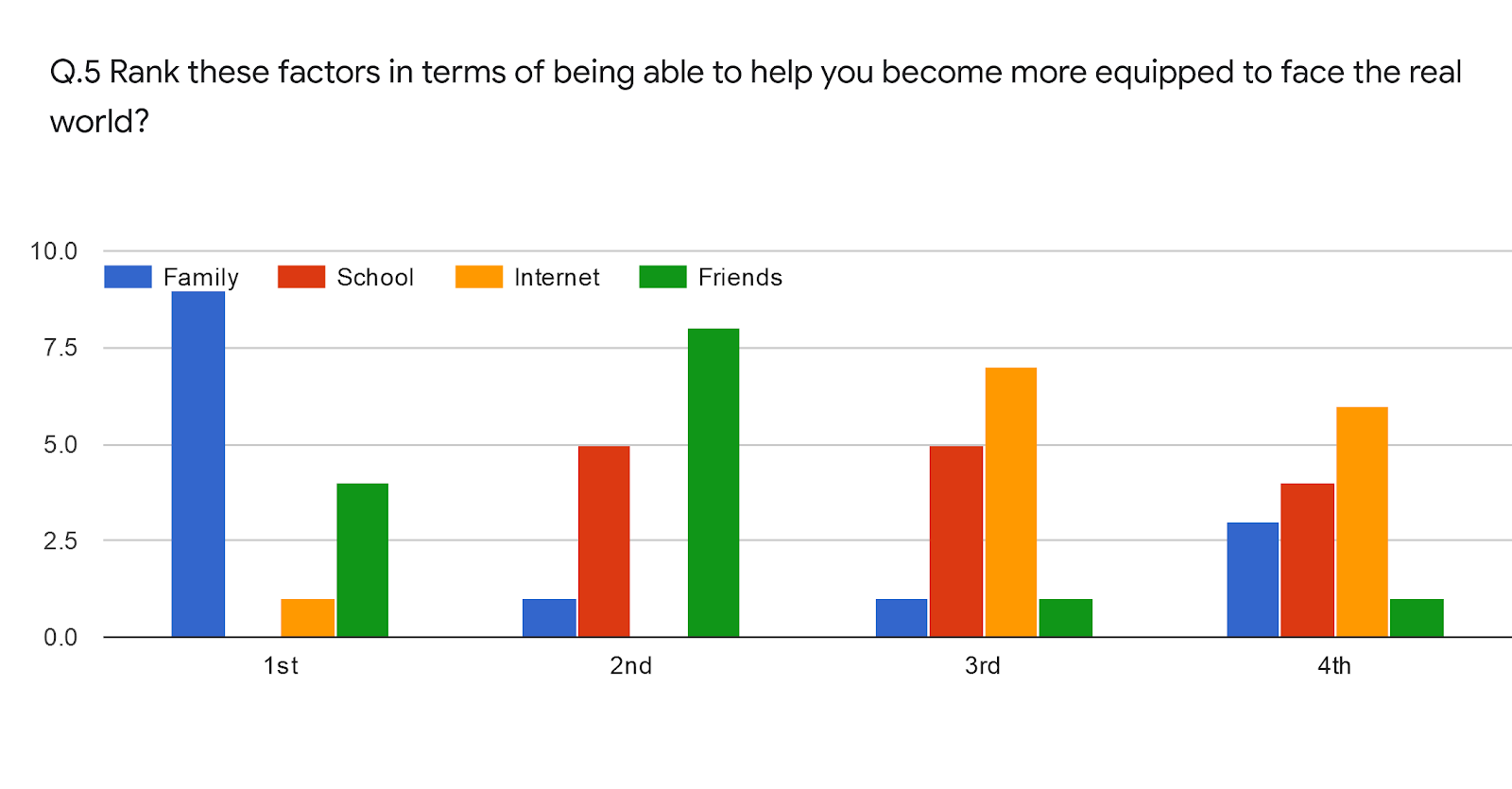 71% of my respondents thought it was easier to be an adult compared to the past. This is important because by being able to “adult” properly, you are able to become an independent person who is able to take care of yourself and stand on your own two feet. Tackling difficulties could also become a goal or motivation for life. A person who grew up in poverty could use that as motivation to never be stuck in the same situation again or a person who has a child in their twenties has to set aside their other priorities to earn money in order to raise a kid.

I asked my respondents whether it is easier or difficult to become an adult now compared to the past. I asked this because I thought this might factor in why young adults felt lost or stuck in life(100% of my respondents).

All of the people who thought it was more difficult now agreed that having a lot of distractions was a big reason why it is more difficult to be an adult now compared to the fast. People just do not know where to put their time and effort now. Things that we can distract ourselves with are also increasing and access to them is getting easier. This makes it so we spend more time on these distractions rather than putting our time into more meaningful things like learning new skills or working on our craft. My respondents agreed things were simpler before. We had fewer things to worry about and most things were easy to understand. My respondents also agreed there was fewer competition before. Now with the growing global population, everyone is competing for the best resources. There is this sea of never ending competition in both education and work. This becomes an easy demotivator for a lot of young adults. Lastly, people agreed it was way easier to sustain a family in the past than now. The cost of living and education has substantially increased. It is more expensive to raise a family now. Even with a degree, it is hard to find a stable job to feed your family because the competition for jobs is so high. It is difficult to compete against people with more experience under their belt for jobs that pay more, so young adults have to start off with the lower paying jobs. This is another reason young adults hold off having kids until they are more financially equipped. Young adults cannot be expected to be able to fork up the amount of money required to buy flats straight out of the gate so many young adults may end up living with their parents even as they hit their thirties.

For the respondents who believed it is much easier being an adult now compared to the past, they agreed that there are more opportunities now. Be it travelling around the globe or trying out new things. They get to experience more than what people did in the past. The increased awareness of social issues, more choice of entertainment and the upgrade of convenience because of technology were another reason the respondents gave. An interesting answer I received was that it was not easier in the past because we do not know what people went through before and growing is hard for everyone no matter what generation you are from. So maybe in the past, young people felt stuck because they did not have enough options. While now, they feel stuck because there are too many options.

When asked how the phenomena of feeling lost in life affect the personal development of my respondents, they answered: There was no motivation for them to go forward and they had self-doubts. It affected other parts of their lives, it affected their schoolwork and even how they interacted with their family. When stuck at the same place, things start to lose meaning for them and they become less motivated to do things. When they feel stuck, some will consume entertainment aimlessly as a form of coping mechanism and end up in a downward spiral. Some of my respondents do not know how to proceed, so they engage in a lot of things and gain lots of skills. But then they become unsure of how those skills can actually help them in the future. Some become less confident in themselves and avoid trying out new things. A respondent said they question what they are doing in life. After studying their degree, they wonder what jobs they can get. They see their friends who studied vocational courses get jobs easily and when they do not get any level of success when finding jobs. A lot of doubt and uncertainty seem to lie in the minds of my respondents. And the overall tone I received from my response was one where my respondents(university students) lacked direction when it came to their future path.

Chan, J. (n.d.). 9 Reasons This Generation Is Having So Much Trouble Finding True Love. [online] Elite Daily. Available at: https://www.elitedaily.com/dating/gen-y-find-difficult-to-fall-in-love/729144.